One of three section chiefs in the Immunization Healthcare Branch.

The role of Clinical Services Section is to anticipate, assess, and mitigate existing and emerging vaccine preventable disease by:

Responsible for leading and managing the 37 Civil Service employees in grades GS-11 to GP-15 assigned to the Clinical Operations Office and the Education and Training Office. The staff works in seven locations scattered across the United States.

Preferred speciality in Aerospace Medicine/Occupational Medicine/Preventive Medicine.  The focus of what we do in the Immunization Healthcare Branch is population health, not direct patient care.

Here is the website where you can get further information:

And here is my video podcast explaining all the various special pays:

This entry was posted in Special Pays and tagged special pays.

This entry was posted in Detailing, Leadership and tagged detailing, leadership.

There are 2 new service schools, MedXellence and MHS Capstone.  If you want these added to your record, check the updated promo prep document below for the procedure:

When I was a Detailer, I would review a lot of records for people who failed to promote. Over and over again I would see FITREPs that reflected poorly on the officer. A lot of the time they didn’t realize it was even an issue, and sometimes they did it to themselves. Here are the top 5 FITREP mistakes you want to make sure you don’t make:

If you are the only officer in your competitive category (meaning that you aren’t competing against anyone on that FITREP), make sure you get an EP. Just like a single air bubble, you should “rise to the top” and get an EP. If you don’t get the air bubble and get a promotable (P) or must promote (MP), it reflects poorly on you unless it is CLEARLY EXPLAINED in the narrative why you are getting a P or MP. Here you can see an officer who got a 1/1 MP in his/her last FITREP and how it would be noted at a promotion board: 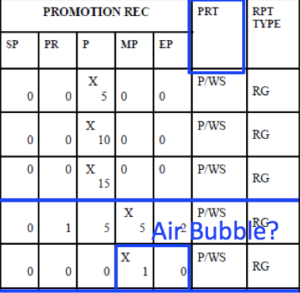 For example, if your reporting senior doesn’t give newly promoted officers an EP, your narrative should say something like, “Newly promoted officers do not receive EP rankings.” Sometimes this happens because your reporting senior is an officer from another service and he/she doesn’t understand the “Navy rules” for FITREPs. Sometimes it happens because either you or your reporting senior wants to give you a P or MP so you can “show progression” and get an EP. If you want to show progression, do it on the overall marks, not the final promotion recommendation. For example, give yourself a 4.0 EP, then a 4.17 EP, and finally a 4.33 EP. DO NOT give yourself a P or MP if you are getting a 1/1 FITREP.

If you are in a competitive group of 2, your reporting senior should give 1 of you an EP and the other a MP. If he/she gives you both a MP, it reflects poorly on both of you. Most often this will happen at an operational command and/or when there are 2 officers who are competing but are in the same promotion year group. Make sure your reporting senior doesn’t take the easy road and give you both a MP. One of you should get the EP, and the other can get a MP with a strong narrative explaining why.

Most often I would see this when a resident who was in a large competitive group was given an EP FITREP. Then when they graduate from residency, their competitive group shrinks and they don’t get an EP but are left with an MP. Here’s what it looks like on when projected at the promotion board: 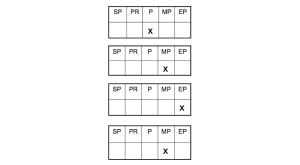 If I was you, I’d fight this like a dog. If they can’t keep you at an EP and you didn’t do anything wrong to deserve this, make sure the reason for your drop from an EP to a MP is clearly explained in the FITREP narrative.

If this happens to you because you are changing competitive groups, like when you get promoted or move from residency/fellowship to a staff physician at the same institution, it is not a black mark in any way and is expected.

Sometimes you have no control over this, and sometimes you may deserve less than a 5.0 in Leadership, but do your best to get a 5.0 there if at all possible.

Every reporting senior has an overall trait average for each rank that includes all of the FITREPs that they’ve done for that rank. You want to try and find out what it is.

While a reporting senior can look up their average on BOL, you can’t. You can, though, see it on your Performance Summary Record if you’ve received a FITREP from them at your current rank. Although it changes every time they do more FITREPs, their average the last time they did a round of FITREPs can be found on your PSR and is highlighted below by the red arrow with blue text (this reporting senior had ranked 6 LCDRs and had an average of 3.50 at that time) on one of the slides from my FITREP video podcast: 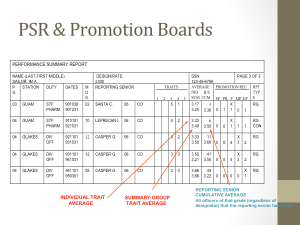 If you have never received a FITREP from your reporting senior at your current rank, maybe your one of your friends has. The other way to find out their average is to ask your chain-of-command. Someone, usually the command’s FITREP coordinator, will know their average for your rank.

It is probably obvious that once you find out their average, you’d like to make sure you are above it. Sometimes there is nothing you can do to be above it because you are getting a P and/or you deserve to be below it, but make sure you don’t rank yourself below it if given the chance to write your own FITREP.

In summary, those are the top 5 FITREP mistakes I often see. If you are interested in learning more, grab a copy of your FITREP and watch this video podcast. In 45 minutes you’ll know everything you need to know to write effective FITREPs.

This entry was posted in FITREPs, Podcasts, Uncategorized and tagged FITREPs.

This entry was posted in Newsletter and tagged newsletter.

I usually stick to career planning topics on this blog, but a reader submitted this interesting article. I had no idea where our corps device came from, and since I didn’t know I’m sure there are others out there who don’t know either. Enjoy reading if this topic intrigues you:

The History of the Navy Medical Corps Insignia

Navy physicians who participate in the FAP & NADDS programs often get promoted off of the reserve list.  Here is the ALNAV for promotion to LCDR.  If any of your friends are on the list, let them know as they often don’t even realize it:

This entry was posted in Promotion Boards and tagged promotion.

1. CTF 76 Surgeon – Medical representative to admiral’s staff currently located at White Beach, Okinawa. The medical staff includes a Medical Planner (O-4 Billet), a Task Force IDC (E-8 Billet) and a Medical Inspector (E-7 IDC based in Sasebo). Responsibilities include being ISIC for the ships within CTF 76. There are 9 total (1 LHD, 1 LPD, 2 LSDs, and 4 MCMs based in Sasebo and 1 LCC in Yokosuka). CTF 76 Surgeon is Medical OPCON to all amphibious ships transiting through the 7th Fleet AOR and aid in any MEDEVAC issues that develop while ships are transiting the AOR. The CTF 76 Surgeon is responsible for monitoring the ships’ Medical Readiness and acting as clinical supervisor for the SMOs, GMOs and IDCs. CTF 76 Surgeon has a significant role in the planning and execution of the medical aspects for wartime contingencies, Pacific theater exercises, and in the event of natural disaster, the planning and execution of the medical portion of HA/DR.

2. OIC FST-7 – FST 7 is a 16 member surgical team that deploys aboard USS BONHOMME RICHARD (BHR). The team consists of 1 Surgeon, 1 Nurse Anesthetist, 1 OR nurse, 1 ICU Nurse, 1 Family Practitioner, 1 MRCO (Medical Regulating Control Officer) and 9 Corpsmen. The OIC is responsible for the credentialing, evaluations, fitness reports and training of team members. When not underway on the ship, FST 7 is ADDU to USNH Okinawa in order to maintain their skills and proficiency in their areas of expertise. There is usually a Spring Patrol (~2 months), a Fall Patrol (~3 months) and every other year a Summer deployment to Australia. This year the Summer deployment will role into the Fall Patrol with a number very exciting port visits in between. FST7 provides emergent and resuscitative surgery for Surgical Emergencies (i.e. Acute Abdomen, Trauma, etc). With FST7 aboard, BHR acts as a Level 2 trauma center and provides ICU care and stabilization for medical as well as surgical cases.

3. CPR11 Surgeon – COMPHIBRON11 is the afloat Amphibious Ready Group Commander usually embarked on the BHR. The CPR11 Surgeon is the Senior Medical authority afloat for all ships OPCON to CPR11 as well as the embarked Marine Forces (usually 31st MEU). While aboard the BHR, CPR11 Surgeon attends operations and
intelligence briefs, and provides daily updates to the COMMODORE and MEU COMMANDER on the medical status within the ARG. The FST is TAD to the BHR and reports directly to the Ship’s SMO who in turn reports to the CPR 11 Surgeon. Often while underway the CPR11 Surgeon provides medical advice for the junior GMOs and IDCs aboard the ships within the ARG. The CPR11 Surgeon with the MRCO coordinates all MEDEVACs from ARG Shipping. CPR11 has a busy deployment schedule and participates in many 7th Fleet exercises to include PHIBLEX (Philippines), COBRA GOLD (Thailand) and Talisman Saber (Australia).

8 Sep 2015:  The FY16 Medical Special Pays NAVADMIN 212/15 has been released.  FY16 Special Pay requests can now be submitted in accordance with OPNAVINST 7220.16.  Submit requests no earlier than 60 days prior to, and no later than 30 days after the effective date.   Send ALL requests and questions to the email address listed below.

Templates for submission can be found here, although your Special Pays person in PSD usually can do this for you:

Here is the NAVADMIN.  If I’m interpreting it correctly, all amounts remain the same from FY15 and can be found here, FY15 MC-DC Special Pay Implementation Guidance.

This entry was posted in Special Pays, Uncategorized and tagged special pays.